Eric Frank Russell‘s novella “And Then There Were None” is a story ancaps are sure to find entertaining.

In the distant future when space travel is the norm, Earth sends a diplomatic spaceship to a planet that has been out of contact for 300 years. But they do not get the warm welcome they are expecting.

It can be read here, or found in the Science Fiction Hall of Fame. Click here for Goodreads. Read on for the rest of the review.

END_OF_DOCUMENT_TOKEN_TO_BE_REPLACED

The New Right by Michael Malice

The New Right: A Journey to the Fringe of American Politics  looks at the recent evolution of political discourse in America from the unclouded perspective of celebrated anarcho-capitalist Michael Malice. Specifically, Malice traces the origins of anti-progressive ideas and organizations from the various 20th century intellectuals who instigated them and the 21st century activists who made them into a force to be reckoned with. Though the topics are serious, Malice uses his irreverent and jolting style to beat humor out of them like candy from a piñata.

Malice opens The New Right with a devastating quote by Murray Rothbard and only waits until the second page to break it to the reader that he is an anarchist and this is not going to be a typical book about politics. Instead, he lays out his definition of the New Right and begins an unwavering survey of the key people and ideas, saying that they are:

A loosely connected group of individuals united by their opposition to progressivism, which they perceive to be a thinly veiled fundamentalist religion dedicated to egalitarian principles and intent on totalitarian world domination via globalist hegemony.

Malice is fair, but not always kind, to current members of the New Right, including Mencius Moldbug, Mike Cernovich, Alex Jones, Milo Yiannopoulos, Anne Coulter, Jared Taylor, Chris Cantwell, and others. Malice never hesitates to point out the flaws in any person’s perspective, but he also makes sure to credit the reasonable ideas therein.

Especially interesting to ancaps is the origin story of the New Right. Malice traces the history of the movement back to Murray Rothbard and Pat Buchanan: END_OF_DOCUMENT_TOKEN_TO_BE_REPLACED

F. A. Harper’s book Liberty: A Path to its Recovery is an attempt to define liberty and a call to reverse the growth of government. Published in 1949, the evils of the state that Harper refers to may seem quaint compared to the economic havoc wreaked by modern governments, but the general principles still apply.

Harper says that, “Liberty exists when a person is free to do whatever he desires, according to his wisdom and conscience.” This is a good definition for freedom, which is often conflated with liberty. Actually, Harper’s discussion of liberty is much more instructive than his actual definition, as he digs into the fact that liberty is related to how people interact and that people who live in solitude have complete liberty:

“If he is prohibited from doing this, by another person or by any combination of persons who are not direct parties to the deal, his liberty is thereby transgressed. And further, it makes no difference, so far as liberty is concerned, under what name the act of prohibition is paraded; or whether it is by a corporation, a cooperative, a labor union, a trade union, the government, or what not.”

Despite the flavor of anarchy in the above quote, Harper explicitly calls for limited government. He simply assumes that limited government produces the “optimal” level of liberty without END_OF_DOCUMENT_TOKEN_TO_BE_REPLACED 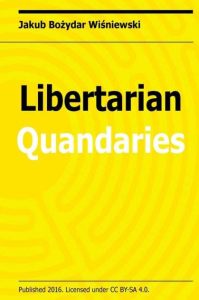 Jakub Wisniewski‘s book Libertarian Quandries is a thoughtful and accurate account of the libertarian ethical system. Though the language is a bit academic at times, the chapters are short and pithy. This makes the book an excellent choice for those who are familiar with libertarianism and want to take their understanding and arguments to the next level.

Wisniewski addresses a wide range of objections to libertarianism, be they economic, ethical, or simply a question of what is practical. Similarly, he mounts a calm but relentless attack on arguments in favor of government. Ancaps will appreciate his consistent anarchist message, while libertarians who are still holding on the idea of limited government will find some interesting food for thought.

That said, there are a few things that call for clarification: END_OF_DOCUMENT_TOKEN_TO_BE_REPLACED

In his book, A Spontaneous Order: The Capitalist Case for a Stateless Society, Chase Rachels does an excellent job conveying insights from both libertarianism and economics. He uses clear explanations of basic concepts and persuasive examples for applications. He relentlessly identifies aggression as the root cause of society’s problems, and the state as the primary source of aggression. Most importantly, the book is permeated by a Rothbardian hatred of the state, which will make it an enjoyable read for any ancap.

Rachels makes frequent use of long passages quoted from other works. Thankfully these are drawn from some of the best sources on libertarianism and economics: END_OF_DOCUMENT_TOKEN_TO_BE_REPLACED

Picture this. You find something you would like to buy online. You try to place the order, but the retailer informs you that they cannot ship the item to your address. Why? The local government banned that item and won’t let them send it to your home. What can an libertarian do?

Leave it to the free market to find a solution. Package forwarding services let you ship a package to one their warehouses located in places where the government has not banned the item you would like. Once the package arrives, they will then END_OF_DOCUMENT_TOKEN_TO_BE_REPLACED

Debt is good for government. Taking money directly from people, a.k.a. taxation, a.k.a. stealing, carries with it a lot of baggage. People resent it. Debt is the easiest way for politicians and bureaucrats to get the money they need to ruin lives both at home and abroad. But even if you think government is a necessary evil, consider how the desire to do good things leads government to make everyone worse off.

Joe Politician wakes up one morning and realizes that education is good. So good, in fact, that everyone should have lots and lots of it. To make this happen, he gets the government to make it very easy for people to get loans for education. People take on debt, purchase more education, and the price of education goes up. So people take out more loans and the price goes up. Soon it becomes normal for 22 year olds to have the equivalent of a mortgage with no house.

There are many ways in which this distorts the economy, but one that is not often discussed is entrepreneurship. END_OF_DOCUMENT_TOKEN_TO_BE_REPLACED

Dr. Ilia Murtazashvili and Dr. Jennifer Murtazashvili have done research on conflict resolution systems in Afghanistan that many ancaps will find interesting. In their paper, “Anarchy, self-governance, and legal titling“, they describe how most Afghanis choose traditional, decentralized conflict resolution solutions over state provided systems. Specifically, the paper focuses on conflicts over land and how, after doing extensive field research, the authors believe that “…it is time to rethink anarchy as a policy option in Afghanistan and similar fragile states.”

The Murtazashvilis are not suggesting total anarchy, but rather a complete laissez-faire system for resolution of disputes over land. This is not simply a matter of economic efficiency, but also the cultural and social norms of the various groups that live in the country.

From a historical perspective in different areas of the world, they point to other academic research:

“The experience on the American frontier provides ample examples of order in the pale shadow of the state. Anderson and Hill (1990, 2002, 2004) depicted how frontier settlers cooperated without relying on the American government in an ‘‘anarcho-capitalist’’ environment. During the California gold rush that commenced in 1848, individuals established informal systems of property rights to allocate access to gold deposits (Umbeck 1977).3 In fact, individuals in each of the major frontier sectors jumped the gun on land settlement by establishing government-like organizations to specify and enforce property rights during times when they had no formal rights to do so (Murtazashvili 2013).”

END_OF_DOCUMENT_TOKEN_TO_BE_REPLACED

Freedom! is a ten chapter rant by Adam Kokesh that makes brief libertarian commentary on war, taxes, the environment, and many other topics. In the style of a political rally keynote, Kokesh attacks statism from a number of angles. His focus does not seem to be to educate the reader with an organized presentation of libertarianism, but instead to inspire them with a rapid tour of libertarian ideas.

His message is generally on point, taking a pure anarcho-capitalist position on most issues. He rightly identifies government as the primary cause of pain and suffering in society. He points out a number of ways in which government makes the world worse off by citing problems caused by war, soldiers, government police, government courts, prisons, eminent domain, government schools, government intervention in medicine, welfare, prohibition and other government machinations.

One place where he seems to trip up is on the environment, saying:

Well, that’s three strikes in a row. If Kokesh uses virgin land as a garbage dump, he is spoiling a natural resources that others might have enjoyed. People could have used it to have a picnic, but Kokesh decided to use it for something else first. Well, according to libertarianism, Kokesh has not done anything wrong. There is nothing inherently better about using the land for one purpose over another. All that matters is that when Kokesh started polluting, nobody else was using the land for something else. END_OF_DOCUMENT_TOKEN_TO_BE_REPLACED 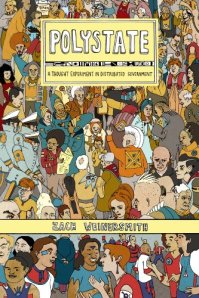 Zach Weinersmith identifies a serious problem in modern society, which he calls the geostate. A geostate is a bounded area of land dominated by a government. The problem with this, as Weinersmith sees it, is that people effectively have no choice in what kind of government they live under. He proposes a new kind of system in which people do not have to be involved with a geostate just because they live in a certain place, but rather may choose from a variety of anthrostates.

These anthrostates are similar to geostates in that they tax their subjects and provide some services. However, subjects may switch anthrostates every year. So two neighbors might belong to different anthrostates. If one anthrostate becomes undesirable for any reason, a person may simply switch to one that is more to their liking. He then defends this polystate system based on the numerous advantages it has over the geostate model.

The most important difference between a polystate and a geostate is not that the latter is location based and the former is not. END_OF_DOCUMENT_TOKEN_TO_BE_REPLACED