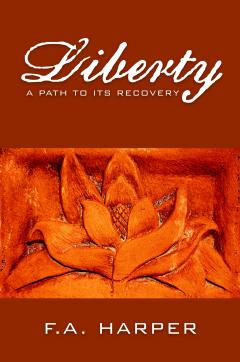 F. A. Harper’s book Liberty: A Path to its Recovery is an attempt to define liberty and a call to reverse the growth of government. Published in 1949, the evils of the state that Harper refers to may seem quaint compared to the economic havoc wreaked by modern governments, but the general principles still apply.

Harper says that, “Liberty exists when a person is free to do whatever he desires, according to his wisdom and conscience.” This is a good definition for freedom, which is often conflated with liberty. Actually, Harper’s discussion of liberty is much more instructive than his actual definition, as he digs into the fact that liberty is related to how people interact and that people who live in solitude have complete liberty:

“If he is prohibited from doing this, by another person or by any combination of persons who are not direct parties to the deal, his liberty is thereby transgressed. And further, it makes no difference, so far as liberty is concerned, under what name the act of prohibition is paraded; or whether it is by a corporation, a cooperative, a labor union, a trade union, the government, or what not.”

Despite the flavor of anarchy in the above quote, Harper explicitly calls for limited government. He simply assumes that limited government produces the “optimal” level of liberty without spending much time trying to justifying that conclusion. Or more directly:

“It will be argued that some government is necessary to prevent the loss of liberty through anarchy; that the liberty of certain individuals should be curbed in the interests of liberty for all; that the scope of government must somehow be decided, and that the officials must somehow be selected; that no better means is available than that of widespread franchise. I agree.”

and again, he assumes that anarchy is not an option:

“Based on all that has been said, one might easily conclude that government is an entirely negative force so far as liberty is concerned. He might conclude that anarchy – the complete absence of government – would be the ideal society, and that liberty would be complete under anarchy. That would be true if all persons were perfect. But they are not. With human frailties as they are, anarchy affords an opportunity for certain powerful and tyrannical individuals to enslave their fellow men, to the extent of their power to gain and keep control over others. So some degree of governmental function – or its equivalent performed in some other way – is necessary if liberty is to be at a maximum; violators of liberty must be restrained so that the rights of liberty will be protected for those who respect them and play the game of society according to the rules of liberalism.”

Of course, it is never made clear why a government is necessary to perform these essential functions. For an ancap, it is probably amusing how the above prose almost begs to be taken to the anarchist conclusion. Not only that, but later he wonders about about how…

“One of the most perplexing problems of the ages seems to have been that of finding the proper place of government in society.”

Despite this, Harper does get a little radical when he attacks the institution of democracy:

“Edmund Burke observed that people never give up their liberties except under some delusion. Probably no other belief is now so much a threat to liberty in the United States and in much of the rest of the world as the one that democracy, by itself alone, guarantees liberty.”

It is also reassuring that he comes down firmly against war. Possibly the best quote from the book is:

“The most deserving glories of peace are to be found in the calm of battles not fought, and in the personages of those who prevented them from being fought.”

A large theme in the book is Harper’s attempt to create some measure of liberty and to use it in arguments in favor of limited government. Strangely, he admits that this is futile before attempting it:

“Strictly speaking, liberty itself defies measurement because it is basically a subjective matter with each person.”

Still, he marches on:

“If each of two persons enjoyed full liberty, with neither of them desiring to enslave the other, their average would be 100 percent liberty (100 + 100) / 2. If one of them acquired the desire to enslave the other, and did so, his liberty would still be only 100 per cent; that of his enslaved fellow would fall to zero per cent, however, and their average liberty would fall to 50 percent (100 + 0) / 2”

He makes a similar attempt to measure economic liberty by how much income is taken by slave masters. While that analysis is a little weak, ancaps will enjoy how he repeatedly describes taxes as ethically equivalent to slavery.

“The superstition prevails that if the government takes from unwilling people the product of their labor to pay for governmental costs of which they disapprove, it becomes a commendable act unlike that of the master taking from his slave. Especially is the taking supposed to be proper if it occurs in a “democratic” nation. It is as though we should rule, by custom or by law, that robbery becomes a commendable act if a large enough number of people approve of it and engage in it.”

The book contains the seeds of many modern libertarian ideas, but does not fully exploit them or develop them into a coherent system of thought. It also contains too many references to Harper’s religion, as well as confusing analogies and circuitous arguments. All of this tends to distract from the core message. That said, it is possible that at the time of its publication this book was both radical and inspiring. However, given the advent of anarcho-capitalism and the relatively large number of must-read books available today, this particular work is probably only useful for historians who want to show the evolution of libertarian ideas in the 20th century.

A sincere but difficult to read exposition of liberty. Three Murrays.