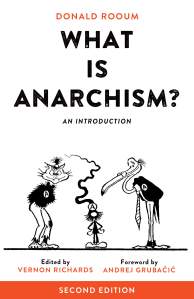 Donald Rooum’s What is Anarchism? is a mishmash of excerpts from a small range of anarchists combined with seemingly unrelated cartoons. The prose are equally incongruous, often relating irrelevant stories or showcasing parts of longer books and essays that are useless out of context.

Some of the chapters are worthwhile reads, and even the bad ones have the occasional gem that gets to the heart of anarchism. But the book as a whole is a confusing mess. There is no theoretical foundation, or common thread that binds the various parts together. Instead, it piles on every idea that has ever associated itself with anarchism, such that anyone who finishes reading the book is sure to wonder, “what is anarchism?”

Anarcho-capitalists may still find the book useful or entertaining, as they already know what anarchism is and are unlikely to be led astray. It could also be interesting to those ancaps who have not read much of anarchists like Erico Maletesta. Erico is featured repeatedly, and an ancap will get a strong sense for why cultural anarchism is so far removed from the plain meaning of the term. Erico is at times on point, saying “anarchy… means absence of government” and at other times insisting that anarchism is about implementing communism, destroying voluntary wage contracts, using violence to achieve goals, and abolishing private property. Other authors contribute direct democracy, anti-austerity, equality, anti-money, anti-barter, anti-privatization, and anti-landlord notions to the morass.

Perhaps most amusing to ancaps will be that, although the author is willing to accept coercion under the umbrella of anarchism, he his not willing to permit anarcho-capitalism.

There are self-styled “anarcho-capitalists” (not to be confused with anarchists of any persuasion), who want the state abolished as a regulator of capitalism, and government handed over to capitalists.

There are also “anarchist” poseurs, like the sartorial stylists who paint A-in-a-circle symbols on their leather jackets without having the least interest in anarchism as an idea, and wrongly self-styled “anarchists” (“anarcho-capitalists”) who want to abolish the state as a regulatory and welfare institution but do not oppose capitalist oppression.

A hundred years ago, “individualism” was used to mean competitiveness, and self-styled “individualist anarchists” had ideas something like those of the “anarcho-capitalists” of our time.

And just for good measure, this wise-crack:

“Libertarian” is used in America to mean one who opposes minimum wages, on the grounds that they reduce the profits of employers.

Still, the book does have many good passages and ideas from authors like Peter Kropotkin, George Nicholson, Vernon Richards, Rudolf Rocker, William Godwin, Philip Sansom. The book could be made into an excellent pamphlet merely by cutting away all of the justifications for aggression and anti-capitalism. By surgically removing the parasitic ideas, a true and inspiring vision of anarchism could shine. From the introduction:

The ideal of anarchism is a society in which all individuals can do whatever they choose, except interfere with the ability  of other individuals to do what they choose. This idea is called anarchy, from the Greek anarchia, meaning absence of government.

An occasionally delightful, but often counter-productive, portrayal of a wonderful idea. Two Murrays.