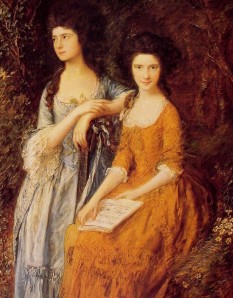 Ethics and Economics (The Linley Sisters)

Economics shows the power of human cooperation. Immense cities, microscopic computers, abundant food, advanced medicine and flying machines are just some of the bounty derived from applying economic principles like division of labor and catallactics. They are the result of having a free market.

Ethics explains the difference between peaceful cooperation and criminal conflict. One might think that the difference should be obvious, but it is precisely the opposite in today’s state dominated society. Conflict is rained down like fire on the economy and private lives of individuals. It is all they have ever known and seems normal. Peace is the hazy dream of only a few millions of people.

Economics is more well known, her nuances cataloged slowly at first and then more rapidly after Ludwig von MIses revealed her lineage. Economics comes from praxeology, the study of human action. Once this was understood, economists were able to take a more methodical approach learning about her. Research became a matter of deduction rather than rumors and guesswork.

Ethics, on the other hand, has had relatively little attention. Many claim to know her well and yet they all seem to disagree on her most basic characteristics. Her relationship to Economics is hardly in dispute only because few care to look into it. Yet, for libertarians there is an obvious connection. The free market, the engine of prosperity and progress, is an ethical concept. It is a state in which no one causes conflict and the only human interaction is peaceful cooperation. The free market occurs when individuals follow the non-aggression principle.

Adhering to this simple ethical rule leads to every economic benefit. No knowledge of business cycles is needed because they simple do not happen without criminal manipulation of the money supply. No one needs to understand that trade increases real wealth because trade happens naturally when it is not obstructed by government.

This seems to imply that the study of Economics might be unnecessary in a libertarian society. However, with the world in its current state, it is important to know things like government controlled currency leads to economic dislocations and transfer of wealth. Understanding Economics reveals the ethical underpinnings of economic phenomena. It helps explain why this type of system is unethical.

As mentioned above, economic knowledge is also an excellent method for motivating the adoption of ethical principles. This brings up the old question of whether it is more effective to make an economic argument to motivate libertarianism or to motivate ethics directly. Would it be preferable to introduce the world to Economics so that they can see the benefits of ethical behavior, or go straight to Ethics? Obviously, any argument that furthers the cause is worth pursuing, and its effectiveness ultimately depends on the audience.

This may seem academic, but the libertarian movement is continually investing time and money to create a peaceful society. If Ethics is equally important as, or more important than, Economics towards furthering that goal, then the amount of money, writing, and research going to Ethics should be equal to, or more than, that of Economics. Unfortunately, that is not currently the case.

Economics may be a young science, but libertarianism is younger still. The theoretical foundation of ethical side of the movement is not nearly as developed. There is a concerted push to raise up the next generation of Austrian Economists, but what about libertarian philosophers? Sadly, they may be receiving even less attention than the handful of deluded libertarians who think they can reign in the system through the political process.