Opponents of libertarianism often ask the following question: if libertarians hate government, why not live somewhere like Antarctica or Somalia? From a very narrow perspective, they have a good point. Anarcho-capitalists could enjoy total liberty by living alone on a deserted island.

However, this would simply be trading one kind of freedom for another. Ancaps want to have freedom from crime, which is called liberty. Yet, they also want freedom from the the constraints of nature. That means technology, wealth, and division of labor in the free market. In a word: capital. If an individual only cared about liberty, any wasteland devoid of people would be paradise. However, ancaps care about capital, too. Hell, it’s in the name.

This is evidenced by the large ancap populations in places like New York City, where taxes are high, the nanny state is only overshadowed by the police state, and the government occasionally kills people for selling cigarettes. They prefer to suffer under the yoke of government and enjoy the high standard of living provided by capitalism. It is not perfect capitalism, but even the hampered market can produce an amazing abundance of prosperity. 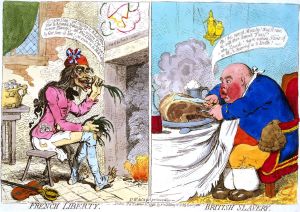 It is important to make this distinction because there is something devious implied by the Somalia challenge. That ancaps do not really believe in libertarianism because they could have liberty but choose not to. That when push comes to shove, they actually think government is better than anarchy.

It is not hard to understand why government apologists are confused. When they imagine the range of possible societies, there is only one dimension. On one end there is government, safety, and food. On the other there is anarchy, war, and starvation. Choosing food is the same as choosing government. Anyone who claims to be an anarchist is delusional because, in the end, everyone has to eat.

However, things are not so simple. While liberty and the state are mutually exclusive, there is no a priori reason to believe that you cannot have both liberty and capital. Once one understands that a society where individuals enjoy both is theoretically possible, the question becomes: will it work? After allowing for the possibility of an anarcho-capitalist society, it is no longer absurd to reject both the options offered by the Somalia challenge. They are merely a false dilemma.

The quality of liberty and capital vary widely throughout the world. When an ancap chooses a place to live, they have to decide what levels of liberty and capital are acceptable to them. They have to compromise between their desire to live peaceful, independent lives and their desire for high standards of living. This does not mean that they must compromise their principles. It simply means that they must apply their principles in choosing between a variety of imperfect options. One ancap may prefer to live in a poor country that does not spy on communication while another may prefer to live in a wealthy country that records everything people say or write. There is nothing inconsistent about either choice.

If the world were rid of governments and private crime, liberty would not be a factor in the decision of where to live. Everyone would enjoy it every day. Ancaps would then only need to decide where to live based on the local capital structure. There are still a great many considerations within capital, such as standard of living, friends and family, etc., but at least they would be choosing what sorts of good things they would like to have in their lives, as opposed to choosing which bad things to avoid.

Libertarianism is only an ethical system. It espouses a single value judgment: that the peaceful coexistence of all people is preferable to any sort of conflict. Anarcho-capitalism includes libertarianism but goes further. It advocates the additional subjective value that it is better to be wealthy and the knowledge that capitalism is the best way to a wealthy society.

As Julian Simon puts it in his book, The Ultimate Resource:

“In the long run the basic forces influencing the state of
humanity and its progress are a) the number of people who are alive
to consume, but also to produce goods and knowledge; and b) the
level of wealth.  Those are the great variables which control the
advance of civilization.
Wealth is far more than assets such as houses and cars.  The
essence of wealth is the capacity to control the forces of nature,
and the extent of wealth depends upon the level of technology and
the ability to create new knowledge.  A wealthy world can find
remedies for a new disease more quickly than can a poor world,
because the wealthy world possesses stocks of knowledge and skilled
persons.  That’s why wealthier groups live longer, with better
health and fewer accidental deaths.”

So, while not very interesting from a rhetorical perspective, the Somalia challenge does give ancaps some insight into the minds of their naive neighbors. Perhaps this will lead to more mutual understanding and fruitful discussions as ancaps spread the ideas of liberty and capital.

3 thoughts on “Liberty is Not Enough”