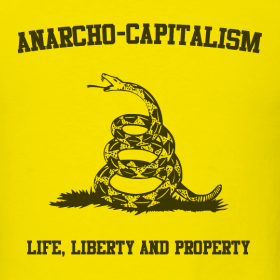 Some like to describe ancaps as alt-right or right-wing libertarians. The reason is that in the American political spectrum, right-wing politicians occasionally use rhetoric that is somewhat close to what an ancap would think and say. For example, the technically-true but misleading “taxes are too high” or an insincere variant of “property owners should get to decide how to use their property”.

With friends like that, who needs enemies? Yet, the American-left’s hysterical call to follow Venezuela into the 9th level of hell is so abhorrent that even enlightened libertarians sometimes find themselves more comfortable in the camp of people who merely like to jail people who smoke weed and murder foreigners.

However, just because one of the two options presented to you by the American media seems slightly-less-horrible, that does not mean that anarcho-capitalists should associate themselves with those monsters. It is fine to work together with socialists or fascists on the rare occasion when their interests align with libertarianism. However, when explaining what anarcho-capitalism is, other philosophies should be kicked to the curb.

Trying to associate anarcho-capitalism with the political-right also has the pernicious effect of driving away some of best libertarians in the movement. Those who have suffered discrimination for their beliefs or lifestyles at the hands of government naturally reject the state and often become the most radical supporters of libertarianism. Their trauma is usually associated with right-wing people and politicians, so associating anarcho-capitalism with the right will likely cost us some of our greatest allies.