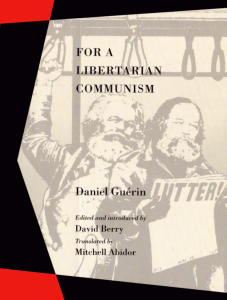 For a Libertarian Communism is a collection of translations from the French communist writer Daniel Guerin. The title implies that the theory inside will include or at least make use of libertarianism, but this is not the case. Instead, Guerin has a slightly different flavor of communism that he is trying to sell.

Unfortunately, Guerin’s brand of communism is not novel enough that the average ancap needs to learn about it. Only those who are doing historical research are likely to benefit from reading this book. You can read the full text here.

Guerin says that, in pursuit of equality and liberty, the libertarian communist movement must resign itself to:

…imposing its will on the majority, first and preferentially through persuasion, and, if persuasion fails, by force.

Needless to say, the closest Guerin comes to libertarian ideas is advocating anarchism in the long run, as many communists do when they talk about the withering away of the state. Until the end of time comes, Guerin advocates theft (but only from the rich) and violence (but only when necessary). His prose are a combination of militaristic language and vague concepts well-suited towards redirecting the reader from critical analysis to “revolutionary action”.

As is common with communist writings, Guerin never defines any of the terms he uses or takes the time to build up any sort of theoretical structure to base his arguments on. He simply repeats over and over that “permanent revolution” requires “self-management”, and a “revolutionary mindset”.

He is more clear about what he does not like: capitalism, most types of communism, money, and nuclear power plants.

Of his own preferred version of communism, Guerin writes:

It cannot, it seems to me, be defined on paper, in absolute terms. It cannot be an endless raking over of the past, but must rather be a rallying point for the future.

Could it be that a definition escapes him because he is attempting to find something that is impossible, namely a functional socialism? Guerin says decisively, but without irony:

Workers’ self-management is, by its very nature, contradictory.

To add to the confusion, he says that:

anarchy is indeed, above all, synonymous with socialism… Anarchism is no more than one of the branches of socialist thought

Guerin’s preferred state is democratic, but somehow non-coercive. Ideally it would be populated by “socialist men and women” who all have an “encyclopedic education”, are capable of taking two-year shifts running society, and are more than happy to do their fair share of the “unpleasant and difficult tasks”. Guerin relates some of those unpleasant tasks in this sad but telling story of communism in action:

Lacking circulating funds, many collectives lived on what they had seized at the time of the July 1936 revolution. Afterwards they had to resort to makeshift methods, like seizing jewelry and precious objects belonging to churches, convents, Francoists, etc. Self-management also suffered from a lack of agricultural machinery and, to a lesser degree, a lack of technical cadres.

Despite having lived until 1988, Guerin seems to have never read anything by Ludwig von Mises or Murray Rothbard. For comparison, Mises refuted socialism in the 1920s, and Rothbard gave a clear exposition of both libertarianism and anarchism in 1973 with For a New Liberty. That Guerin never learned from real libertarians is unfortunate, because a true libertarian perspective would have made his historical writings much more illuminating.

Despite it’s many flaws, the book has the occasional historical anecdote or moment of clarity. It can also provide some perspective on the thought process of socialists if one has never been exposed to them, or if one is in need of a few laughs.

An insider look at a marginal branch of communism from the mid-20th century. Two Murrays.